As we approach the election, it is heartening to see that there is greater Government acceptance of the climate change emergency. This is forcing people to think again about sustainability and energy – finally!

At AET we are seeing increased awareness of our system and the sustainability and energy benefits it brings across the Construction and User sectors. Construction accounts for so much of the worlds materials and energy consumption, we must rethink how to build, use fewer materials, and reduce wastage.

Saving height in new builds whilst maintaining the same headroom is where the greatest benefit (see our One Benjamin project detailed below) comes from, as we reduce the amount of materials needed for a construction project, the embodied energy, operating energy and so on. Going forwards these are going to be increasingly crucial issues for any new building. 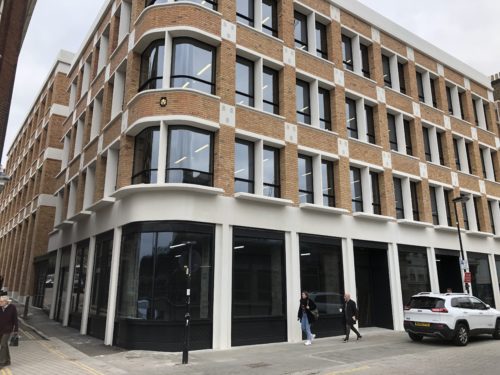 One Benjamin is a new mixed-use address in Farringdon designed by world-renowned architects Alford Hall Monaghan Morris, and situated directly opposite the new Farringdon station.

The original air conditioning design specified four downflow units per floor, but the contractor didn’t think that this was the best option for the building. AET had built up a strong working relationship with the main contractor, Knight Harwood, while working on a previous project at 20 Soho Square. Having seen the advantages of the AET system on that project, Knight Harwood saw the opportunity at One Benjamin to redesign the original Stage 3 hot/cold aisle design and to implement AET’s underfloor air conditioning solution for the three floors of office space.

AET’s underfloor air conditioning systems make use of the space beneath a raised access floor to create the air ventilation path, eliminating the need for ceiling-based services and associated duct and pipework. At One Benjamin, each of the three floors was divided into zones of up to 300m2 depending on the potential use and occupancy density of the area. Each zone is then supplied with chilled or warmed air by a zonal air handling unit or CAM (Conditioned Air Module) and the conditioned air is then delivered into the space using a number of recessed fan terminals (Fantile™).

One Benjamin selected AET’s most flexible system, the CAM-V, which makes use of the raised floor void as a plenum for the distribution of supply air, whilst receiving return air back to the CAM unit at ceiling or high level. With a CAM-V system there is a considerable amount of flexibility in where the Fantiles can be placed, allowing for easy reconfiguration depending on the particular needs or layout of an office. For maximum flexibility each Fantile is supplied with onboard  Fanspeed and Set Point adjustment, but in meeting rooms and cellular space AET offers Flextouch™ wall-mounted controllers which allow users not only to adjust the fan speed and temperature, but also CO2 and humidity monitoring and control.

Headroom Height was a key consideration during the design and build of One Benjamin, and by using the AET underfloor air conditioning system the contractors were able to eliminate much of the ceiling-based services and ductwork. The offices were developed to provide a sustainable workplace, and have been awarded a BREEAM ‘Excellent’ rating. The reduced amount of building materials needed for an AET underfloor system, as well as its long-term flexibility, make it an excellent choice for sustainable building projects.

Overall, AET was able to provide One Benjamin with a high-performing and flexible air conditioning system which was more suited to its needs than the originally proposed downflow system. The building was completed in July 2019 for the Girdlers Worshipful Company and is now beginning to rent its office space and residential units.

AET Flexible Space, a pioneer of under floor air conditioning (UfAC) solutions, is looking to extend its global footprint by identifying distributors with the same ethos and focus on quality and professionalism.

With a global portfolio of over 300 projects; many of which are notable world class developments such as The Center, Hong Kong’s 5th highest skyscraper and the world’s most valuable office building, the famous Willis Building in Ipswich designed by Norman Foster, Microsoft in Shanghai and numerous other prestigious buildings across the world, AET is looking to secure distributor agreements to further extend its global footprint.

AET recently signed a distributor agreement with PT Prima Solusi Jayantara, a long established company with experience in supplying to the construction sector. This enabled AET Flexible Space to extend its already significant presence in the region.

AET provides its distributors with a comprehensive support package which includes training, marketing and new business development. AET also has a professional training site based in London but is also able to offer on-site training at distributor locations in order to support the initial on-boarding process.

Some recent contracts recently won by AET Flexible Space include:

We are looking forward to partnering with our brilliant architects and contractor partners on these projects and will share further updates as the installations progress.

AET in the news

Underfloor, ductless HVAC systems could be a thing – SNIPS Magazine

Also look out for us in Electrical Times, and Professional Electricians Wholesaler.

We’d love to hear from you. Get in touch with us at:

Thank you @BCO_UK for an outstanding conference in, it was a pleasure catching up with industry colleagues.

A great way to close the session with an inspiring discussion from @thefuturenauts giving us a wake up call & challenging developers to make buildings more sustainable.

See us at #BCO Manchester tomorrow!

Find your way around the conference this week, chat online, view the speakers, delegate list and more! Download the app now from your phone's app store by searching 'British Council for Offices'

Wishing all our #connections a great Queen’s Jubilee Celebration from all the #team here at AET!