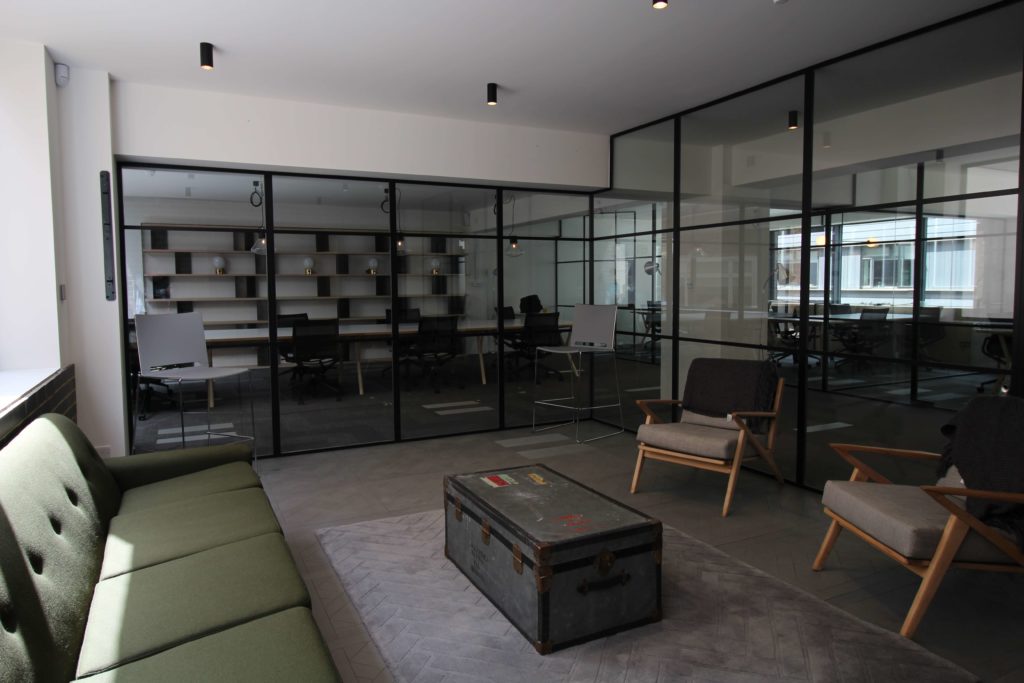 The 26,000 sq. ft., 1960’s post war building was fully refurbished in 2006, enlarged and remodelled by Architect, Buckley Gray Yeoman, with underfloor air conditioning and raised access flooring installed throughout the seven floors.  The existing system at Kirby Street is a CAM-C system with underfloor supply air and underfloor return air. The first floor is split into two zones, with each zone served with a CAM-C35 downflow unit supplying conditioned air to the underfloor plenum. This conditioned air is supplied into the workspace via fan terminal units, known as Fantiles, which are recessed into the plenum beneath the raised access floor. Underfloor air conditioning systems are inherently flexible and easily reconfigured according to changing demands of the space.

The recent upgrade at Kirby Street was specifically for the 1st floor area, occupied by established creative agency, 7Fold. The existing CAM-C downflow units were retained, but the original AC fans were changed out for new high efficiency EC fans for enhanced performance. Existing Fantiles were cleaned and relocated, with an additional twelve units supplied to cater for increased cooling loads anticipated by the client as a result of the space reconfiguration. The workspace is a mixed workspace with open plan areas, modular meeting pods, a formal meeting room, soft meeting/lounge room and kitchen facilities, and is used by 7Fold and creative industry freelancers.

As well as the core equipment upgrade, the client opted for new sound attenuator boxes to be installed beneath the Fantiles to minimise noise transfer between the workspace, fan booster modules to enhance fresh air provision and ten FlexTouch wall controllers were fitted to permit easy control of Fantile temperature and fan speed as well as CO2 monitoring. New for old Nesite raised access flooring was also supplied including 40 m2 bespoke covering, Grey Oak Istoria Parquet, for the soft meeting/lounge area within the space.

AET worked directly for the landlord, Grosvenor Securities on the fit-out works, which were completed in May 2018, and the end result is a fabulous adaptable collaborative space suited to the creative community in the Camden area of London.

The five-story #office building was originally built in the 1950s and was acquired by Hines on behalf of HECF in 2007. We are looking forward to the #installation of our UfAC system throughout the building.🏙

Hong Kong's best attended & most ambitious business event for #sustainable development! AET will be at Booth No. B50 and will showcase its UfAC System.

We were saddened to hear of the passing of Her Majesty The Queen.

We would like to send our condolences and deepest sympathies to the Royal Family at this time.

Rest In Peace Your Majesty 👼🏼